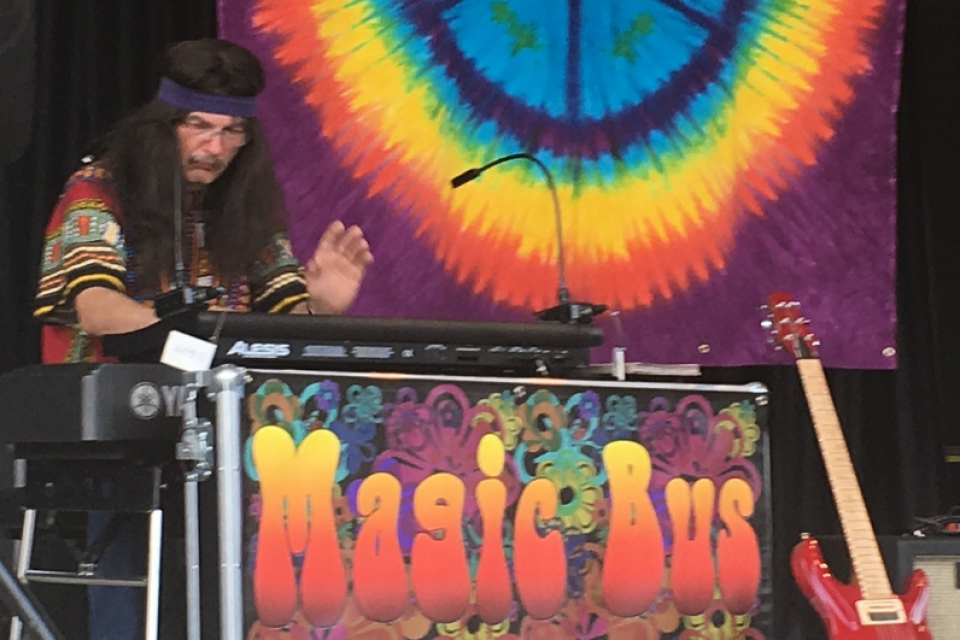 "Thank you so much for a great evening!! We found out about your show from a random man we met at Birds Eye, and immediately bought tickets. We were hoping for a fun night out in the Soo, but we were treated to so much more. You all are so incredible as a group. Playing that many different groups songs is incredibly difficult, yet, you absolutely killed it! There are two other pieces of information I want you to have.

1. It’s important to me that you know, as a self-proclaimed audiophile, music is one of the most important things in the world to me. When you started playing “White Rabbit,” and Melissa started singing, I was met with wave after wave of chills, and before I knew it, I had tears running down my face. That is such a hauntingly beautiful song to begin with, and I have never been moved so deeply by a performance. It was almost as if Grace was there with you.

2. I would trade every skill I have in life to be able to pull off Mark’s Joe Cocker impersonation.  Every movement was perfect. We happened upon the Magic Bus almost by accident, but we will always be along for the ride. A thousand times, thank you!!!"  Josh Winkler, Paradise, Michigan - Concert at Kewadin Casino DreamMakers Theatre, Sault Ste. Marie, Michigan.

“For those who are not from Michigan.....Magic Bus has grown from a local band, to a smashing success with a cult like following in our State and beyond.  For many of us, it started put as enjoying the sounds from someone we knew in high school....Mark Harrington.  From the first time you attend one of their concerts, you will be bitten by the Magic Bus bug and willing to ignore downpours of rain to listen to the perfect replay of childhood memories. They have far outgrown the venues where they play, but remain true to their fans and followers. Thanks Magic Bus, for bringing our memories back to life!!!!”  Rick Smith

"We have two standards for community summer concert series: 1) musicianship, and; 2) entertainment value. When we secured Magic Bus for a concert, we projected their ability to meet that standard. What happened in action was extraordinary. Their songs from the late 60's were so polished in their presentation that it was equivalent to having booked 20 original bands directly from that era. They immerse themselves in the genre and care deeply about entertaining. What a value!"

Thank you, for the great time we had with your band.

Wanted to just thank your Magic Bus Band for such a great performance on  May 30th! We had a Ton of compliments and it appeared a good time was  had by all in the name of charity! Thanks again and we look forward to partnering up again n the near future.

Have a great weekend!

As a former hippie peace & love freak, I just want to  say that you guys were incredible last nite at the Hippiefest. It was the best time I've had in years. We are a bunch of retired Hippies from Michigan and
Southern California.  You guys really took us back. You're wonderful!! PLEASE continue to do what you
do so well.   And please let us know where you will be playing next so we can come party with you again. Thanks again.

Peace love and happiness to you all.
Karyn
Owens of White Lake


There were 10 of us there to take in the Hippiefest at Baker's and we all loved the show.  You fellows were absolutely amazing!   It was so impressive to see the number of people attending this event and the dance floor filled to capacity.

The songs you played were certainly difficult and you fellows pulled them off as if the original artists were playing them.  Fantastic musical ability!More importantly, the cause for the show was one of great honor.  I can tell you that when the Sgt. got up to speak, my wife was in tears, knowing that our son has seen two tours in Iraq and currently stateside in the military.

We also appreciate the endurance of your bandmembers.  To play 1 1/2 hours sets in not an easy thing to do.

Congratulations on a fine performance!

just wanted to send you a note about your performance last Thursday at the Clarkston Eagles......you guys were GREAT...I had invited some friends for your show and they all said that you were outstanding....thanks for evening


Just saw you at Club 59 .  Had a wonderful time, you guys are great.  I celebrated my 62nd birthday that nite.  You brought back wonderful memories. Can't wait to see you in the area again....

Just wanted to show some love on here guys.  I watched the videos and saw all the pics and think you all are fantastic!  You put on a great show, I only wish that I still lived in Michigan so I could come out and enjoy your shows!
Rock on!
Darlene


Enjoyed the show very much we had a Great time.

Our thanks to you and the group, looking forward to the next show.

I caught the show last night.  It was groovy!  Looking forward to the next one.

Hi - I saw your show in Clarkston last week and thought you did a great job.  First time I've seen it.  It's not often that bands will attempt to hit all the notes/riffs that made the originals what they were - hell, even your drummer pays attention.  Do you do Hot Smoke and Sasafrass (Bubble Puppy)? –Jeff


Just wanted to let you guys know how much my wife and I enjoyed your show last night. We are both in our 60's and danced our butts off. This was our second visit with "The Magic Bus" and I have to admit it was as good as the first and we will be back. Please put us on your mailing address list.


I have never had soooo much fun.  GREAT MUSIC, NICE PEOPLE

"Great show tonight guys, you wailed! The tunes were spot-on to the originals. I especially appreciated hearing tunes like the Spirit, Small Faces and Strawberry Alarm Clock stuff. Thanks for not playing all the same old junk everyone else plays! Keep it up!!!"

Be sure to subscribe to our newsletter forthe latest Festival, and Special Event Informationand Much, Much More! Become part of the Magic Bus Experience